Falsettos is the combination of two Off-Broadway shows, March of the Falsettos (1981) and Falsettoland (1990).  It first opened in it’s current form on Broadway in 1992 and was nominated for seven Tony Awards. It was revived in 2016 and was nominated for another 5 Tonys. And now, in May 2019, in comes to Chicago’s James M. Nederlander Theatre!

The story centers around Marvin, who begins married with a 12 year old son. He decides to leave them for his new love interest, another man. His wife then goes on to marry their therapist. All of this leads to a lot of dramatics and they search for happiness in this new situation.

In this musical, almost everything is sung. It’s difficult to pull this off without any spoken dialog, but this production manages just that. It is a very emotional ride.

The performance by Thatcher Jacobs, who plays the son, is very impressive as he holds his own among all the adults. Nick Adams (“Smash”) is solid as the new boyfriend and Max Von Essen (“The Good Wife”) is fantastic as Marvin. Lastly, Nick Blaemire (“The Good Wife”) is hilarious as therapist.

The set design is very clever. It starts as just a huge cube in the center of the stage, but it comes apart into pieces for all the different scenes as chairs, tables, and more.

Get tickets now for Falsettos through June 9th!

Cost of a ticket: $71 and up
PlaylistHQ Economic Rating:  Worth It
Rating Scale: Exceptional Value > Worth It > Half Price > Go for Free > Don’t Bother

Like Loading...
A young couple hires a nanny to help with their baby. They don’t want to define the gender, so they just refer to it as baby. They haven’t even named it by the time the nanny arrives. The nanny treats the baby very roughly by just throwing it around. They eventually decide the baby is a girl and name her Daisy. However, at age 15, Daisy has realized that he is a boy. He wants to change his name and stop wearing dresses. This all leads to many therapy sessions unpacking his childhood.

Elise Marie Davis (At The Table, Girl in the Red Corner) is hilarious at the completely aloof mother. Tyler Anthony Smith is excellent as the equally lost father. Jamie Bragg is fantastic as the uncaring nanny doing whatever she pleases. Jose M Cervantes shines as Daisy, struggling to figure out his life after being raised in such a strange manner. And lastly, Kirby Gibson is solid as Cynthia. 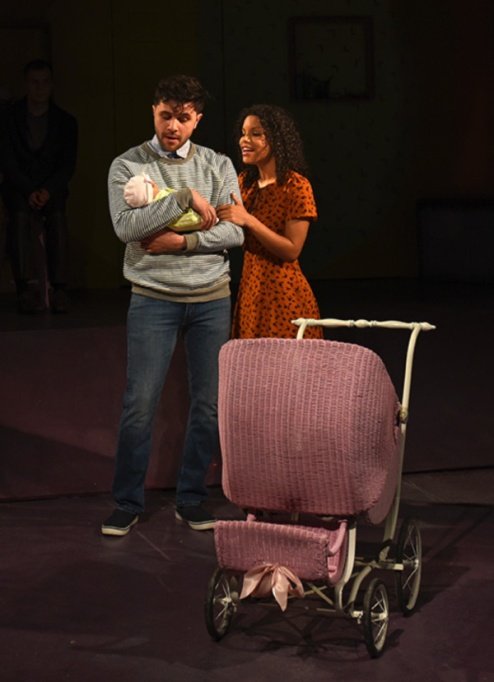 Get tickets now for Baby with the Bathwater through May 19th!
Cost of a ticket: $35
PlaylistHQ Economic Rating: Half Price +
Rating Scale: Exceptional Value > Worth It > Half Price > Go for Free > Don’t Bother
Quinn Delaney

Shara Nova features prominently on the 2009 Decemberists album, Hazards of Love. Her powerful voice is a major highlight of the rock opera. She also toured with the band following the release. Fans of this performance were then lead to her main project, My Brightest Diamond. On June 30, 2014, she was scheduled to play at Millennium Park with White Mystery. Unfortunately, the show was cancelled last minute due to lightening.

Nova has very supportive fans who continually shout “I love you” and “You rock!” It adds to the very intimate atmosphere at Lincoln Hall. It’s a great place for one of her most beautiful songs, “Another Chance”.  “If I get another chance at love, I will call you my sweet thing.” The crowd is enchanted by her fantastic voice on this song.

She invites the opener, Tunde Olaniran, onstage to sing a song. It’s such a joyful celebration of life and music watching them perform together.

Catch My Brightest Diamond on tour now!
Cost of a ticket: $20
PlaylistHQ Economic Rating: Worth It +
Rating Scale: Exceptional Value > Worth It > Half Price > Go for Free > Don’t Bother
Quinn Delaney

“Chicago,” the musical of “murder, greed, corruption, violence, exploitation, adultery and treachery” swept into its namesake this week. And while that pull quote may have lost its zing after being used in 23 years of reviews, the show itself has not. Indeed, now the second-longest running musical on Broadway (still running since the 1996 revival!), the show has not lost its steam and this current tour is no exception.

The leads of Roxie and Velma (played by Dylis Croman and Lana Gordon) are in strong form and had the audience in the palm of their hands with each joke, each high note, each Fosse step. Jennifer Fouché also shines (as Maton “Mama” Morton) and seems to be particularly relishing the joy and fun of the show.

There’s also a child-like glee in seeing the show in Chicago itself, let alone at the Palace Theater, which opened in 1926 during the vaudeville era — where Sophie Tucker is even believed to have performed! (“And Sophie Tucker’ll shit, I know, to see her name get billed below. . . Roxie Hart”!)

Get tickets now for Chicago through May 12th!

Nick Offerman (Mullally’s husband) walks onto the stage and is met with a loud applause. He starts off by saying something like “In these dark times, when we need 17 varieties of Oreos, Nancy and Beth provide much needed relief.” Megan Mullally’s microphone was already live, and she could be heard laughing before she entered the stage with her musical partner, Stephanie Hunt.

Later on, Nick returns to the stage to introduce the band members. He picks a type of sausage to describe each person. He kneels down at last to introduce Megan. Her sausage is… the banger. The crowd erupts in laughter!

The best song of the night is “I Don’t Love Her” by Gucci Mane. It’s hilarious to hear this graphic song performed by this band. The second best one is “Saved” by LaVern Baker. Midway into the song, Nick enters the stage playing a giant drum. He truly is the highlight of the night.

Cost of a ticket: $45
PlaylistHQ Economic Rating: Half Price +
Rating Scale: Exceptional Value > Worth It > Half Price > Go for Free > Don’t Bother

This beautiful piece gives you the feeling that you are watching an endless ocean below an infinite ocean. The walls are all shades of blue and all the dancers are wearing shades of blue. It’s very graceful and the music composed by Peter Gregson is excellent.

This piece originally premiered at the Norwegian National Ballet in 2013. It’s a very baroque style piece which means it is very opulent and elegant. In contrast to the first piece, this one features all red outfits. When a big group of dancers drop their red robes, it at first seems that they are completely nude. In fact, they are wearing skin colored tights.

This piece is completely different from the other two. It is a modern dance piece set to a electronic music soundtrack created by Ross Allchurch. The performance shows an immigrant struggling to fit into his new country. Everything seems chaotic and confusing around him as the dancers use sharp movements across the stage under a strobe light. He feels completely disconnected until he finds one person he can relate to and they fall in love. It’s an intensely dramatic dance that is followed by a standing ovation from the audience.

Catch The Joffrey Ballet next with Jane Eyre in October, 2019.

Three nuclear engineers are dealing with the aftermath of a disaster at a nuclear plant. Hazel and Robin have been together for 38 years and have four children. They decided to move further away from the plant. Rose dated Robin before Hazel and has been having an affair with him. She has just returned from America after having living there for many decades.

The ads for this show and the title are a bit misleading. There aren’t any scenes at the nuclear plant and they never wear gas masks. Also, there aren’t any children in the play. They are only spoken about. The story is actually about these three engineers and their relationships to each other and how they will respond to this disaster. It’s a roller coaster of emotions as they struggle with their decisions.

Ora Jones (Familiar, The Roommate) is excellent as Rose, who has a very big proposal for the couple. Janet Ulrich Brooks (Native Gardens, Pipeline) is great as Hazel, who is very suspicious of Rose. Lastly, Yasen Peyankov (A Doll’s House, Part 2) is superb as Robin, who is holding on to many secrets. All together they make a great cast who play off each other very well.

The set, designed by Chelsea M. Warren, is fantastic. It’s a house cut in half on the edge of a cliff, which gives the production a sense of impending disaster. The sound design by Andre Pluess also adds to creating this dangerous atmosphere.

Get tickets now for The Children through June 9th!

Cost of a ticket: $70
PlaylistHQ Economic Rating: Half Price +
Rating Scale: Exceptional Value > Worth It > Half Price > Go for Free > Don’t Bother

Like Loading...
The founding fathers are out late partying when suddenly they realize that the bill of rights is due tomorrow! They decide to do it now and to continue drinking. “I want to say whatever I want!” says Jefferson. Great, freedom of speech. “Lots of guns!” says Adams. Great, the right to bear arms. Then they ask the audience for something that bothers them. “Loud farts!” Oh yes, they all agree. Paul Revere has the loudest farts because of all his horse riding. That should definitely be illegal. “Homework!” Absolutely should be outlawed! If someone asks for your homework, plead the fifth!
This is a great example of how they blend improv with a scripted scene. The following scene on the other hand, is completely improvised.
A stewardess (Atra Asdou) ask a couple (Laurel Krabacher and EJ Cameron) what they would like to drink mid flight. The woman wakes up her husband to ask what he would like. He is way less then upset that he should be for being woken up. He calmly asks for warm milk. The stewardess only has cold milk. “Can you warm it up?” “Let me check” she says. In the back of the plane, another flight attendant (Andrew Knox) tells her that the milk comes out ice cold from the dragon’s nipples and they don’t have any way to warm it up. Suddenly, turbulence hits (announced by Chuck Norment) and the dragon (Mark Campbell) flies away. “Sorry, we are out of milk. The dragon flew away!” Scene! 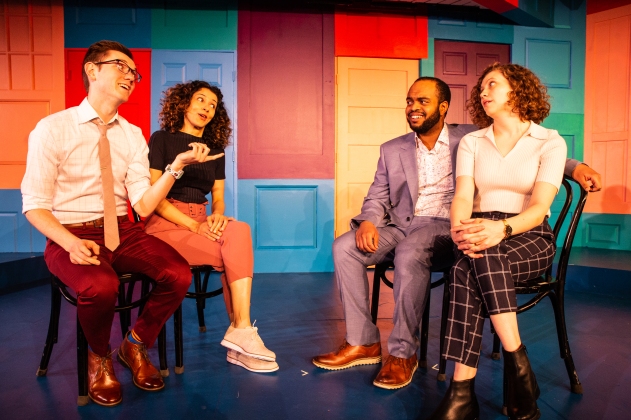 As you can see, the entire cast joined in on this scene. They all improvise really well together and bring out each other’s strengths. Their scripted scene are also great including a game show called Toss and Turn about trying to fall asleep and an extremely awkward dinner with your girlfriend’s parents. Saying anything further would be spoiling some of the fun. While the current main stage show is very political, this one provides a break from politics, It really is funny for everyone! Get tickets now for Grinning From Fear to Fear!
Cost of a ticket: $36
PlaylistHQ Economic Rating: Exceptional Value
Rating Scale: Exceptional Value > Worth It > Half Price > Go for Free > Don’t Bother
Follow us on Facebook!