Two adult brothers, Austin and Lee, are staying at their mother’s house in the desert while she is in Alaska. Austin is working on a screenplay that he is going to present to a producer that is coming over. He wants his brother out of the house at this time. So, he reluctantly gives him the keys. The producer comes over and Lee returns just as they are wrapping up. Lee invites the producer to play golf so that he can pitch his story, against his brother’s wishes. The producer ends up loving the story and the two brothers must work on it together, despite their differences.

Sam Sheppard (Fool to Love) has written here another play that explores human relationships incredibly well with great pacing. Jon Michael Hill (Pass Over, Constellations) plays Austin, the right brained one who is organized and focused on his work. Namir Smallwood (BLKS) plays Lee, the left brained one who is a bit of a mess but is creative and can come up with great ideas. The actors have great chemistry together and truly create an intensely conflicted brother relationship. Francis Guinan (Downstate, The Minutes, The Rembrandt, Hir) is solid reprising the role he played back in the 1982 Steppenwolf production in a very cool link to the past.

As usual for Steppenwolf, the set by Todd Rosenthal is very impressive. A full house is built on a desert lot. It really sets the scene well. Also, the sound design by Richard Woodbury is fantastic. The twangy western guitar mixed with the sounds of coyotes is perfect. All of the elements really come together for an immersive experience.

Get tickets now to True West through August 25th! 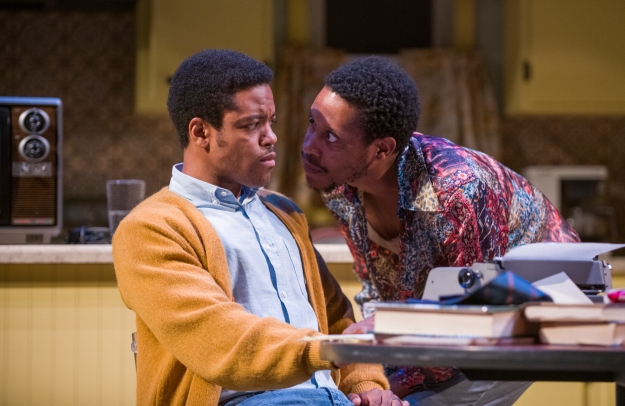