Ray LaMontagne takes the stage at The Chicago Theatre with Carl Broemel, a guitarist from My Morning Jacket. They begin with “Be Here Now”. Ray’s fantastic voice along with their great guitar synergy makes for a beautiful sound.

Soon afterwards, they play “Beg Steal or Borrow”. This is one of his more upbeat songs. “All the friends you knew in school, they used to be so cool, now they just bore you”. He doesn’t say much between songs. He just allows the songs speak for themselves.

Very sparingly, Ray plays the harmonica during tonight’s performance. It’s absolutely heavenly when he does. He should play it a lot more often. It’s just as good as when Neil Young plays this small instrument.

There are many couples embracing in the theatre. His music is very romantic.

The moment that he speaks the most is when he talks about the opener, Kacy & Clayton. He comments how they are so young and talented. He completely loves their sound.

In the encore, they play “Jolene”. The entire audience sings “Still don’t know what love means” along with them and continue to replay it in their mind as they happily make their way home.

Three Muslim women are discussing polygamy. One of the women is married and is strongly opposed to the idea. The other two are more religious and support the idea. When one of their husbands marries a second wife, these beliefs are strongly challenged and their friendships are put to the test.

The play is presented as a comedy, but it is more of a dramatic soap opera. It is a light hearted exploration of a serious topic, polygamy. It also dives into the Muslim faith, which is uncommon among the theatre available in Chicago.

Catherine Dildilian is great as Amira, the strong independent artist. She quotes “Kahlil Gibran” to describe her marriage: “And stand together yet not too near together. For the pillars of the temple stand apart, and the oak tree and the cypress grow not in each other’s shadow.” Marielle Issa is excellent as the young and naïve Samara, searching for love while following the Muslim rules. Annalise Raziq is solid as Khadija, who questions her beliefs when her husband marries a second wife behind her back.

Many Arabic words are used in this play. Here are a few definitions:

Get tickets now for Twice, Thrice, Frice … through November 10th.

Jane Eyre was written by Charlotte Bronte. It was first published in 1847. Cathy Marston adapted the story into a ballet in 2016 for Northern Ballet in Doncaster, England. It’s North American premiere was in New York in June 2019 by the American Ballet Theatre. And now, in October of 2019, it premieres in Chicago.

In the story, Jane has a hard childhood as an orphan. However, she persists through it and becomes a teacher. This leads to a position as governess at Thornfield Hall, where she teaches the child of Mr. Rochester. There is a spark between Jane and her employer, but things will not go smoothly from here.

This ballet is truly narrative. It’s amazing how much can expressed through dance without words. However, it could also be helpful to have surtitles describing the action taking place on stage like they do at operas. Perhaps this will take place when the Joffrey moves to the Lyric Opera in the fall of 2020. Or, maybe it’s best not to have them and not worry about the meaning of the words and just get swept up in the emotion.

Victoria Jaiani as Jane and Fabrice Calmels as Mr. Rochester are fantastically impressive as the leads. They are so graceful and balletic.

The music was compiled and composed by Philip Feeney creates the emotional atmosphere expertly. It is played magnificently by The Chicago Philharmonic Orchestra.

Get tickets now for Jane Eyre through October 27th!

In 1950, Sunset Boulevard was released as a film, directed by Billy Wilder. On July 12th, 1993, the musical version premiered in London starring Patti LuPone. Just five months later, it opened in Los Angeles starring Glenn Close. In 2017, Close reprised her role in London and on Broadway. Now, Porchlight Music Theatre opens their version in October of 2019.

In the musical, an older actress is planning her great return. She has written a gigantic script for her next film. At the same time, a young writer is trying to make it in Hollywood. One night, his car breaks down in front of her house. Upon them meeting, the actress learns that he is a writer and convinces him to stay and help with her screenplay. She even gets him to move in. At the same time, he is working on another project with a young engaged woman. Conflict is inevitable.

With some musicals, it can be difficult to understand the words or it is tiring having every word sung. This is not the case with this production. The singing is slow and clear. Also, the acoustics in the intimate Ruth Page Center for the Arts are excellent. This production keeps the 1950’s feel and will appeal to older audiences.

Hollis Resnik is superb as Norma Desmond, desperate to return to the spotlight. Billy Rude is excellent as Joe Gillis, troubled by the choices presented to him. Michelle Lauto (In the Heights, HAIR) is great as Betty, looking for her first big break in Hollywood. Larry Adams (The Merry Widow) is spectacular as Norma’s servant, who hides many secrets from her. The entire cast sings beautifully.

Get tickets now for Sunset Boulevard through December 8th!

The setting is a western style saloon in the middle of Texas. A game of liars dice is being played in the back corner. The bartender is pouring drinks for the thirsty people at the bar. In walks a woman known as “The Wisp”, like a wisp of smoke. She grabs an acoustic guitar and sings. She is seeking revenge and she is close to finding the man she is hunting down. Suddenly, another woman enters the saloon screaming and drops dead. Then, she rises from the dead, thirsty for blood. She attacks the others until “The Wisp” puts a bullet in her skull. This is no ordinary night at the bar. 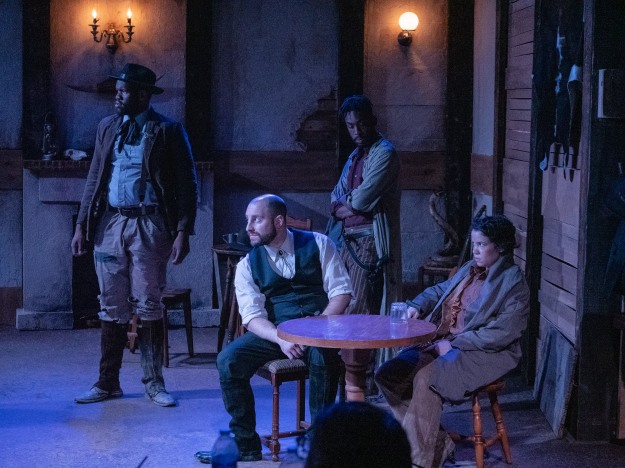 This horror play is perfect for the Halloween season. It builds up the drama and tension leading to the bodies piling up. The audience wonders who will make it out alive. Also, a song at the beginning and one at the end is a great touch. 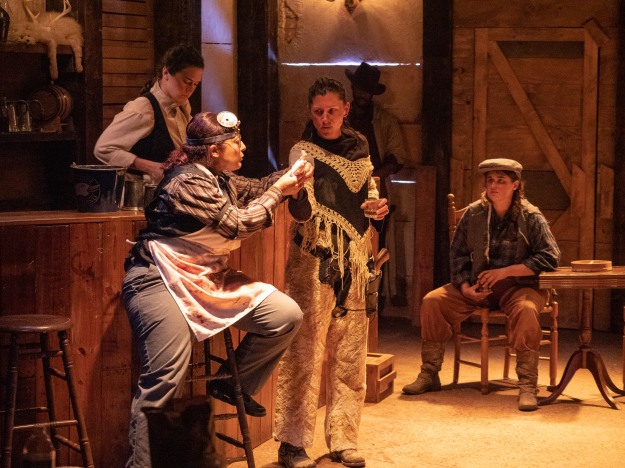 Sophia Rosado is absolutely cold blooded as “The Wisp”. George Zerante is tough as nails playing Glanton, the man whom “The Wisp” is seeking. Nora King is hilarious as Shelby, the witty blind girl in the corner. Ardarius Blakely is excellent as Cole, a spot on western gunslinger. The rest of the cast is solid in their supporting roles often ending in a gruesome death.

Get tickets now for Hell Followed With Her through November 9th!

The digital program is available here.

Bari is a professor who teaches nihilism. Her status is ABD, all but dissertation. She cannot teach again until she completes it. Bari is struggling to finish so she takes a job at a fulfillment center. At the center, she makes a few new friends who convince her to go on a date with Mike. On their date, she has a seizure which results in her acting as if she is high on LSD. She loves the feeling and doesn’t want to fix whatever is causing the seizures out of a fear of losing that feeling.

This play is very smart, funny, and heartfelt. The 90 minutes fly by without a lull in the quality of dialog. It’s a journey of self-discovery in midlife.

Rebecca Jordan (Shameless) is excellent as Bari, searching for meaning in her life. Joseph Wiens (The Realistic Joneses) is hilarious as Mike, an eccentric guy building houses out of found items, aka, trash. Deanna Reed-Foster is excellent as Patty, the leader at the fulfillment center who also wants to lead her employees’ private lives. Lastly, Demetra Dee is delightful as Luanne who is young and enjoying the simple pleasures of life.

Get tickets now for Be Here Now though October 19th.

PlaylistHQ Economic Rating: Worth It

A research crew on Pluto has lost contact with Earth. It has been three weeks since they had any communication and the crew is starting to worry. The clocks at the station begin to malfunction leading them to no longer be able to tell how long it has been since last contact. The crew discusses the bad conditions on Earth before they left. All the animals and plants have died. Everyone is living on the last patch of land not underwater. They wonder if everyone on Earth is dead. 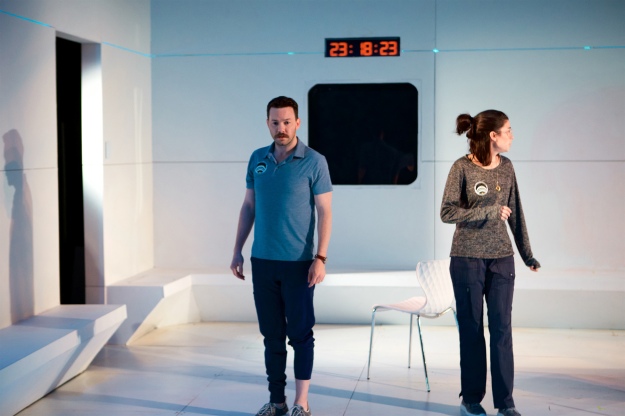 The scenic design by Yu Shibagaki is absolutely fantastic. The set is all white except for few silver appliances. It’s truly has that futurist space feel. The sound design by Michael Huey is excellent in creating suspense and setting the scene.

This show would fit in as an episode of Black Mirror. Both of them envision future dystopian societies and have many twists and surprises that will keep you on the edge of your seat. It’s an intense ride.

Gage Wallace (Mike Pence Sex Dream) is excellent as Clark, the most joyful of the crew. H.B. Ward (The Realistic Joneses) is great as Ray, the most pessimistic one. Sarah Price (The Wolves) puts on a very strong performance as Gilda, struggling to stay positive. Krystal Ortiz and Natalie Ortega also are solid in rounding out this stellar cast.

Get tickets now for X through October 27th!

“Hold the Line! Love isn’t always on time!” sings the lead singer on “Hold The Line” from TOTO’s 1978 self titled debut album. The song still sounds great after 40 trips around the sun, as their tour is named. It gets the whole audience out of their seats and singing along.

“Rosanna” is another crowd favorite. It’s from their 1982 album, Toto IV. They joke about how creative they are when naming their albums.  “Not quite a year since she went away, Rosanna. Now she’s gone and I have to say, meet you all the way.”

They also play “Human Nature”, which was written by the keyboardist and became a hit for Michael Jackson.

Dominique Xavier Taplin plays a fantastic keyboard solo. He is filling in for the regular player. He is also a member of Ghost-Note, headed by two drummers from Snarky Puppy.

At last, the lead guitarist asks the crowd “Are you ready for that song?” Everyone stands up and joins in singing “Africa”. It’s quite a magical moment when the band stops and just the crowd is singing the melody.